There are still lots of question marks surrounding the three bids for a majority stake in Opel, Germany's economy minister has said. 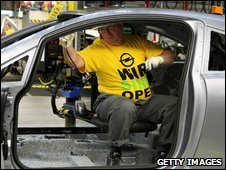 Opel and Vauxhall workers are concerned about their jobs

Karl-Theodor zu Guttenberg said that the needed to take on more risk if any deal was to be agreed.

The German government is closely involved in talks between Opel's owner General Motors and the bidders, having pledged considerable financial support.

If a deal is not agreed, he said, Opel could ultimately face .

"There are still lots of question marks. For example, the bidders have to ensure that the new Opel company can start with a strong capital base. Otherwise, the EU Commission will not accept the rescue," Mr zu Guttuenberg said.

"If everything fails, what we do not want to happen - Opel's bankruptcy - cannot be ruled out ultimately," he added.

In May, the German government backed a bid from Canadian car parts Magna to take a stake in the troubled carmaker.

Just last week, RHJ said it was in "advanced" negotiations with GM.

Magna wants control of some GM intellectual property rights, as well as distribution rights in Russia, something which the US carmaker is not willing to hand over.

Now it appears there are doubts in Germany about all three bids.

GM has just emerged from bankruptcy protection after losing billions of dollars following a massive in sales due to the global economic downturn.

As part of its cost-cutting measures, the carmaker is selling GM Europe, which employs a total of 54,500 workers across Europe, with 25,000 based in Germany.

Under the Vauxhall brand, the firm employs 5,500 UK workers and has plants in Luton and Ellesmere Port.

There have been worries that UK workers will suffer sharp job losses as financial support for Opel from the German government safeguards German jobs.