The EU's main R&D funding scheme has delivered mixed results, a report by the European Commission has concluded. 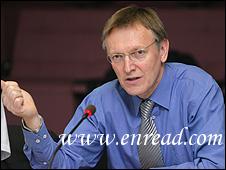 Although the 7th Framework Programme (FP7) will have a 10% year-on-year increase until 2013, but some member states' performances widely.

Science and Research Janez Potocnik insisted that R&D funding would help ease the impact of the current financial crisis.

He added that countries needed to raise their national research budgets.

"It's a （陈腔滥调） that is used too much, but a crisis is too good an opportunity to be missed," he told delegates at the Research Connections 2009 conference in Prague.

"We should not think only about how to deal with the crisis, we should definitely think about what shape we will come out of the crisis," Mr Potocnik added.

"Will we be able to compete globally at that moment, to address the major challenges of today?"

The Commission's report showed that 36,000 proposals had been filed under FP7, requesting a total of more than 10bn euros (￡9bn) in funding.

Mr Potocnik said that the so-called Lisbon strategy on R&D, which set the target of spending for an average of 3% of GDP from 2010, was a difficult proposition（建议，命题）.

The European economy, he , had less private investment than, for example, the US.

He welcomed the recent announcement by President Obama that the US would aim for the same goal of 3% of GDP on R&D spending.

"It is good to hear from across the Atlantic that they have made the same commitment, but it's again a sign for us that we have to step up our efforts on this side," Mr Potocnik said.

He added that he （意见相同，一致） with President Obama that considering research spending in the current financial difficulties as a luxury was a "major mistake".

The commissioner said the principal problem in reaching the 3% goal was getting member states to commit to higher targets of national funding that supplemented European funds from FP7.

He also noted that those states which invested less at home were less successful in securing FP7 funds - a situation that was the norm among the 12 newest member states.

"We noticed a strong and interesting （相互关系，关联） between domestic investment in R&D and success rate in FP7," Mr Potocnik observed.

"To put it simply, the best way to succeed is to increase capacity at home. I know that's easier said than done but it is important for all member states."

The Commission remained hopeful in its goals for a united European Research Area, but Mr Potocnik said there was still work to be done.

"We are in the middle of a construction site," he told the conference. "We know our aim: to make Europe a leading knowledge economy.

"But, as with any great building project, there are （绳索） that need to be together."