The global economy is set to decline by 1.3% in 2009, in the first global recession since World War II, the International Fund (IMF) says.

In January, the IMF had predicted world output would increase by 0.5% in 2009.

The for the advanced economies are not much brighter in 2010, with an overall forecast of zero growth.

The IMF says this represents "by far the deepest post-World War II recession" with an actual decline in output in countries making up 75% of the world economy.

Currently, output is falling by an "" 7.5% annual rate in the rich countries in the last quarter of 2008, and the IMF expects the same rate of decline in the first quarter of this year.

Only a recovery in developing and emerging market countries will propel（推进，驱使） the world economy back into positive growth in 2010, at a weak level of 1.9%.

The prospects for world trade are even gloomier, with the IMF now forecasting world trade volumes to decline by 11% in 2009, and barely grow at all in 2010.

After 60 years as the engine of world growth, the sharp fall in trade is now hitting many of the leading exporting nations, particularly in Asia. 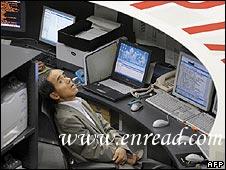 Developed economies such as Japan, the US and UK are in recession

The IMF says that "the recession is expected to be... quite severe in the United Kingdom, which is being hit by the end of the boom in real estate and financial services".

And it is warning that the UK budget （预算赤字） will rise to 11% of GDP, "reflecting mainly automatic stabilisers and asset-price related revenue（财政收入，税收） shortfalls rather than discretionary（随意的） （刺激，激励）".

The UK is also facing the cost of paying for the bail-outs, which the IMF estimated in an earlier report at 9.4% of GDP, or ￡130bn, after correcting an earlier figure of ￡200bn.

At the heart of the crisis is the continuing overhang of losses in the financial , which the IMF now estimates at tn, four times higher than it projected just one year ago.

And it warns that the current outlook is "exceptionally uncertain, with risks still weighting on the downside."

It says the main risk is that "policies may be to arrest（逮捕） the negative feedback（负反馈） between （恶化） financial conditions and weakening economies in the face of limited public support for policy actions."

Among the risks are that rising household and debt cause further falls in asset prices and losses by financial institutions.

And it says that any recovery will be slower than in the past.

There will be a smaller financial sector, with financing harder to come by than in the past, especially for developing countries, which will （束缚） their growth.

And rich countries will face the burden of reducing their budget which have soared during the crisis, at a time when their ageing populations means they will have lower tax revenues.

In addition, households may be reluctant to resume their previous spending habits, as saving rates have risen sharply in the US and the UK.

The IMF says it is important to take urgent action to shore up the banks, and to continue with short-term stimulus plans, in order to shorten the length of the recession.