'No plans' to sell off greenback

Aug. 13 - The US dollar plays an important role in the global system and dollar assets are an important part of China's foreign exchange reserve, the central bank said yesterday.

The announcement by the People's Bank of China (PBOC), experts said, should that Beijing would sell off its US dollar reserve in response to Washington's pressure to revaluate the yuan.

"The US financial market is huge and has high , and the dollar assets, including US government bonds, are an important of China's foreign exchange reserve investment," Xinhua quoted a PBOC official as saying.

Last week, the UK's Daily Telegraph reported that two Beijing "officials" had sent an "economic threat" saying China could " its vast holding of US if Washington imposes trade sanctions to force a yuan revaluation".

The newspaper said the remarks were in response to the passage of a bill by the US Senate Finance Committee last month that would impose higher trade on China-made goods if Beijing refused to revalue the yuan at a faster pace.

Xia and He Fan, of the State Council Development Research Center and the Chinese Academy of Social Sciences, were quoted as saying that if Beijing triggered a dollar crash now, when the US dollar is weak, it could cause a in US bond yields, ruin that country's housing market and even slow down its economy.

US officials responded strongly to the report because Washington has been struggling with the financial mess caused by the sub-prime mortgage crisis.

The PBOC official's statement ruling out any such threat said China, which had a foreign exchange reserve of .33 trillion by the end of June, is a responsible in the international capital market.

"For China, safety, liquidity and investment returns are the main targets of its foreign exchange reserve management," the official said.

"In deciding the of the currency assets structure, (we) have consistently stuck to a long-term, strategic policy, taking into consideration multiple factors such as China's foreign economic development, evolution of the international monetary system, as well as changes in the international capital and foreign exchange markets."

The official called for dialogue and exchanges to enhance understanding.

"The close economic and trade relations between China and the US play an important role in the stable economic development of the two countries, as well as the world economy," the official said.

China attaches great importance to strengthening bilateral communication and exchanges, including the Sino-US strategic economic dialogue, to reach a , he said.

However, only several months ago, it was widely believed that steel export in last June and July would decrease greatly, as China had just released its control regulations on the steel industry.

“Obviously, the steel industry is to the macro control policies,” said Jia Liangqun, a steel production expert. However, another expert thinks the high export volume in last July will drop in August when the control regulations take effect. 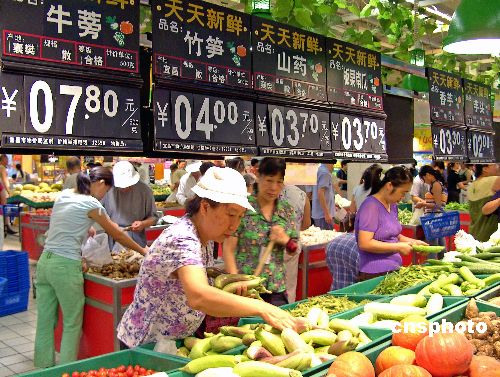 During the first half of this year, price of food increased by 7.6% compared with the same period last year.

China does not export inflation to other countries, expert

Chinanews, Beijing, Aug. 14 – The rise of the prices of exported goods is the result of the rising costs, the Renminbi and Chinese exporters' growing in setting prices. China does not export inflation to other countries, said Mei Xinyu, a Ph.D who now works at the International Trade and Economic Cooperation Research Institute under the of Commerce.

Since the 1990s, China changed from a country that merely exported primary products and imported finished products to one that imported a large number of primary products. At present, China is the largest importer of , manganese and other mineral resources. In addition, China is the world’s third largest oil importer, only next to the United States and Japan.

The price rise of exported goods, according to Mei, is caused by excessive , which by itself is caused by the loose policy adopted by governments in Western countries years ago. In Japan, for example, the Japanese government carried out a zero interest monetary policy. In the United States, from January 2001 to June 2003, the Federal Reserves cut down its interest rates thirteen times. As for China, excessive liquidity problem is caused by issuing too much base money, a measure taken in response to China's large foreign exchange reserves. The large foreign exchange reserves in China are caused by the high international payments surplus. In some way, China's large trade surplus is a of the high US . In order to solve the problem, it will not make any sense for China to act alone. Rather, governments from US, Europe and Japan should work with China to solve the problem, Mei said.

Some experts say that on the whole, the price rise of exported goods is a good thing for China. It indicates that China has improved its position in the international division and interest distribution.

上一篇：China will not witness overall, sustained price hikes, offic 下一篇：Gas in coal mines to be extracted for commercial use

Gas in coal mines to be extracted for commercial use

Chinanews, Yangquan, Aug. 14 – Gas existing in coal mines was once regarded as the No. 1 for coal mine workers. Now, the dangerous substance will soon become a useful material in China's energy use. Last week, scientists in Shanxi Province's Yangquan, a coal city in China, announced that they had obtained the technology to extract and liquidify from coalbed gas.

This will be a revolution for China, or even for the whole world, in which China will turn the dangerous gas into a useful material. When international oil price at a high level, the new technology indicates that as the largest country in the world with coalbed gas, China can put its large amounts of gas resources into commercial use.

The new technology was developed by the owned Beijing Zancheng International Investment Company, a think tank from the Technical Institute of Physics and Chemistry of the Chinese Academy of Social Sciences, and the Yangquan Coal Group, a large state-owned company in China. On August 9, the three parties jointly announced the fruitful results of their new technology. 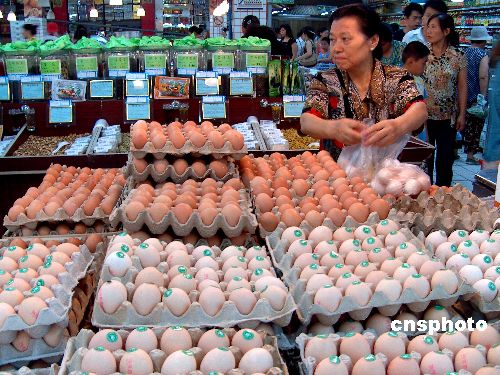 BEIJING, Aug. 14 - Chinese share prices continued to rise on Monday, with the benchmark Shanghai Composite Index reaching a record high of 4,839.95 points during the morning session before closing at 4,820.06 points, 70.69 points higher than the previous close.

The Shenzhen Index on the small stock exchange market, driven up by property firms in the past few days, dropped 207.33 points to close at 16,116.1 points on Monday.

said only a small number of recorded profits from the rise as only about one third of the stocks rose while two thirds remained level or dropped.

Some institutions are pulling the major index up and preparing to sell their stocks, they said.

The combined on the two bourses is more than 235 billion yuan (31.04 billion U.S. dollars), up from 228 billion yuan on the previous trading day.

The figure, however, did not panic investors. The Shanghai Component Index saw a slight drop after the new figure for the inflation was released in the morning and then quickly picked up again.

Amid panic brought about by mortgage crisis in the United States, the global stock market markedly last week. But the Chinese market continued its upward trend.

The total market value of stocks on the Shanghai and Shenzhen bourses rose to around 21.15 trillion yuan (2.79 trillion U.S. dollars) last Thursday, even higher than China's GDP in 2006.