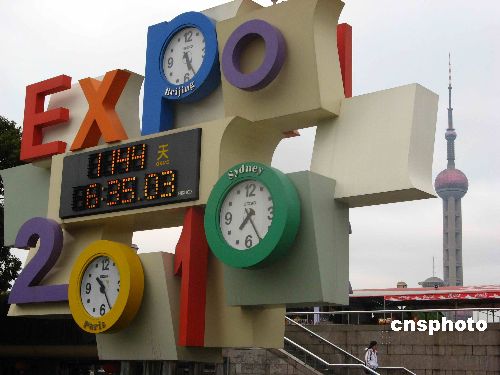 By March 12, some 105 countries and 15 international organizations had confirmed to attend the 2010 Shanghai World Exposition.

Chinanews, Shanghai, March 14 – Several cinemas are under construction in Shanghai, besides the two that were completed recently. In fact, the whole movie industry is booming right now.

According to the latest data, there are less than 20 foreign-invested cinemas in Shanghai, but they contribute 30% of box-office values there. The most popular cinemas and the most luxurious ones are all foreign-invested, too.

In fact, the success of foreign-invested cinemas has set good examples for Chinese .

It is estimated that there is still a 10-billion-yuan space for domestic box-office value to grow, not to mention that the market value will very probably increase to 10 times its current size. No investors will neglect this raw diamond.

Chinanews, Beijing, March 14 – According to “A Report of Overall Competitiveness of China's Economy”, Shanghai, Beijing and Guangdong Province rank among the top 3 competitive economic regions in China, while Sichuan Province is the fastest-developing one, as its ranking has leaped 8 places from the 2004 report.

The report was published on March 13, 2007, by Social Sciences Academy Press. It is based on several carefully selected indexes and mathematic models, with the statistics collected in 2004 and 2005. The major include macro economic competitiveness, industrial competitiveness, sustainable development capacity, and regional financial capacity.

Ten provinces rank higher than in 2004, and 10 lower. Anhui Province should be aware, as its ranking has dropped by 6 places.

Interestingly, the rankings of Fujian Province and Inner Mongolia are quite high, while they are usually considered as “less-developed regions” in China.