The global economy will grow a faster than expected 4.2% this year, says the International Fund (IMF). 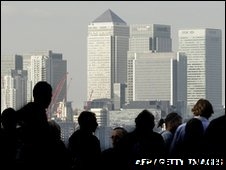 However, recovery in many advanced economies "（微温的，微热的） " and high government debt levels need to be addressed, the IMF said.

For this reason, governments must continue with economic （经济刺激） measures this year, it added.

The IMF forecast the UK recovery would "continue at a moderate pace", with a weak pound exports.

The fall in the currency will help （抵消，弥补） （被制服的，减弱的） domestic demand, it argued.

The comments were made in the IMF's latest World Economic Outlook.

The fund expressed concerns about the continued shortage of bank lending, which it said was likely to remain subdued as banks built up their capital bases.

The body also raised concerns about the options available to governments to continue their economies.

Governments across the world have already reduced interest rates to record lows in order to demand.

"A key concern is that room for policy manoeuvres（策略，演习） in many advanced economies has either been or become much more limited," the fund said.

What governments can, and must, do, is make public their plans to cut debt levels, it argued.

"There is a pressing need to design and communicate medium-term （巩固，合并） strategies.

"These should include clear time frames to bring down gross debt-to-GDP ratios over the medium-term, as well as （意外事故，可能性） measures if the （恶化，退化） in public finances is greater than expected."

Governments should not start to cut spending until next year, the IMF said, apart from those countries with high debt levels that needed addressing now.

Greece, for example, has been forced into a series of spending cuts and tax rises in order to bring down its budget .

The IMF also said that governments must come to an agreement（达成协议） on regulatory reform of the .

The fund has proposed that all financial institutions pay a bank （征税，征兵） - at a flat rate - and also a further tax on profits and pay.

The measures are designed to make banks pay for the costs of future financial and economic rescue packages.