German luxury carmaker Porsche has said it has already beaten its annual record for most cars sold. 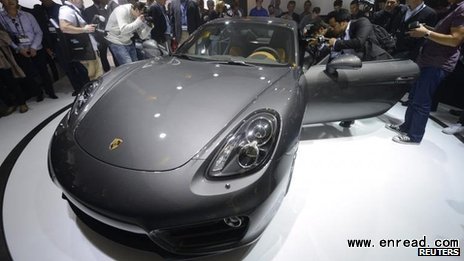 Porsche and sales chief Bernhard Maier said that last month alone was up 39% on November 2011.

Demand came from China and the US, where there was 70% more demand for Porsches last month than in 2011.

The demand from other countries has picked up for slack demand in recession-hit Europe.

The result has been a 7.1% fall in car sales in Europe so far this year, with some southern European markets seeing sales by about a fifth.

carmakers, such as Porsche and BMW, and budget manufacturers, such as Hyundai, are doing well. But mid-market players - such as and General Motors' Opel and Vauxhall units - are having a torrid（热情的） time, suffering falling sales, profits and market shares.

David Bailey, a professor of international business strategy and economics at Coventry University Business School, told the BBC that Porsche's success was driven by "huge growth in emerging markets".

"The premium producers are doing very well and the lower end is doing well too. What you have is a bit of a squeezed middle."